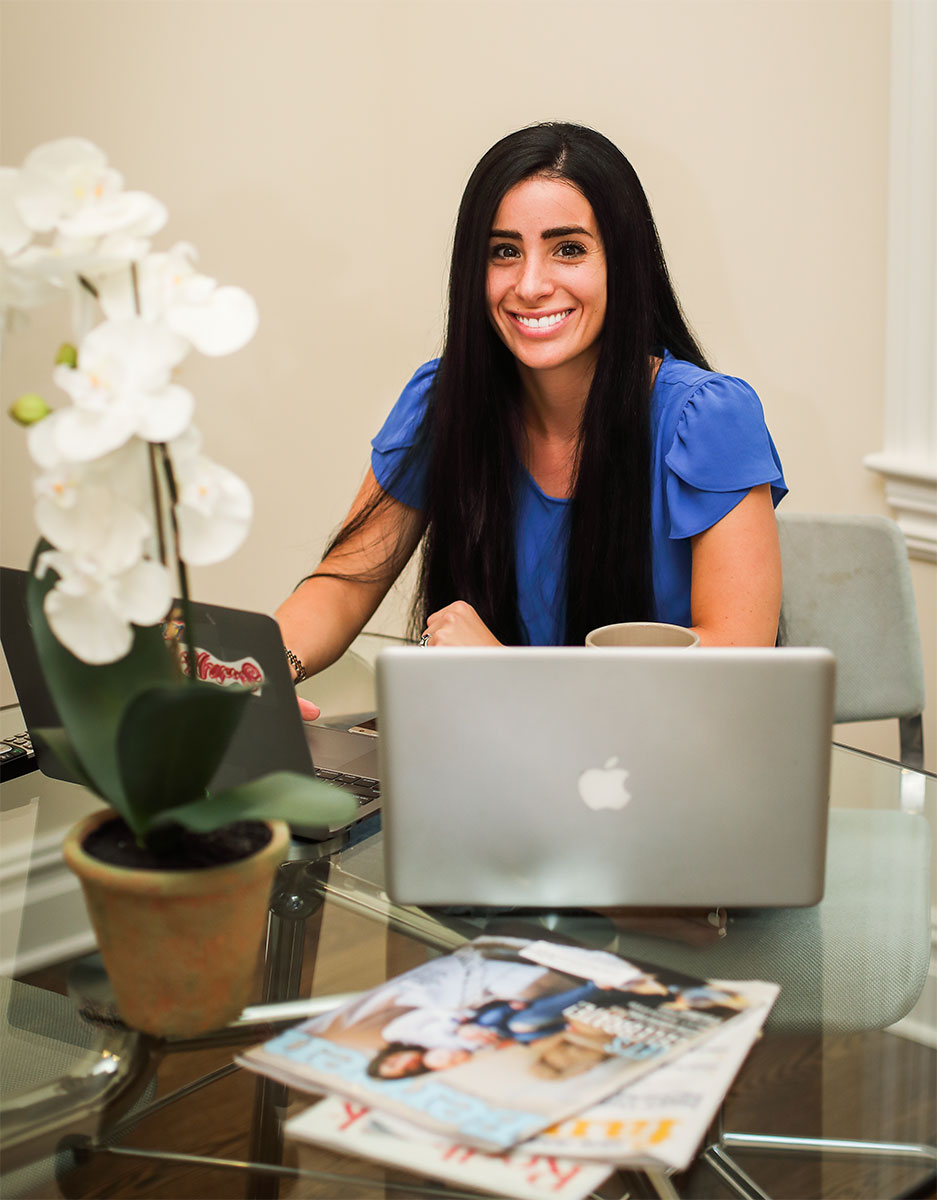 Felice Bernard used to teach her high school English students “The Great Gatsby” and “Of Mice and Men”. As she taught students about the American Dream through each novel and how the characters aimed to achieve it. Influenced by the themes of the books, Bernard began to think about creating her own business and entering the entrepreneurial world.

Being a mother, she found that taking and sharing photos was far different due to modern technology. She missed the days when a photo album was about stories that were passed down from one generation to the next.

Having a desire to leave education and step into the business realm, Bernard found away to bridge the gap between modern photo technology and the photo albums of the past. In 2017, after 18 long months of hard work, Bernard launched TimeSpring, a photo sharing app that sends images to a loved one at a pre-set time and date in the future. TimeSpring allows users to send a photo years into the future to a loved one. Mothers and fathers can send photos to their children 20 years into the future that were take on the day the youngsters were born.

Bernard’s creation is connecting people even posthumanously. TimeSpring has also allowed grandparents and terminally ill patients to upload photos and set a send date in the future to reconnect once they have parted.

The former high school teacher turned app entrepreneur has been overwhelmed with the response of TimeSpring. Recently, Bernard took time to speak with TotalPrestigeMagazine about the app, her career, and what users can expect.

Felice, the TimeSpring app is one of the first real advances in photos other than social media since people began to share photos and snap images. How did you come up with the idea for the app?

I think that TimeSpring is the first real advancement in sending a message to the future. It’s new, but the concept is old; the idea of passing down memories is essentially human. The inspiration for TimeSpring came about very organically from my experience being a parent: Both my husband and I started writing the children letters to share our experiences and wisdom. We had imagined we would give these letters at all special times and milestones in their life because, at the time, our kids were too young to understand or appreciate the content of what we wanted to share. Fast forward to today, we have families on TimeSpring parents and grandparents sending messages to their children and grandchildren. It’s pretty amazing.

As a mother of three, how important is it to you to share photos and memories with your kids when they get older?

It’s extremely important. I remember growing up always having a family photo album and collection of photos that my mom put aside for me. I’d look at photos of my childhood, ask my mom to tell me the story behind the photo for probably the hundredth time. With those stories, I was able to gain a sense of identity both within my family and as an individual. Generation Alpha, who is going to be the most photographed generation in history, is not going to have that same interaction. Thanks to camera phones, capturing hundreds of images is effortless, but saving them in a meaningful way is very challenging today, especially video. TimeSpring streamlines this process by saving these images, so that they last long enough for children to own and enjoy them later in life.

Can you tell us about the initial response to the app and how people are sharing photos and videos with others?

Initially, I was unsure how people were going to behave on the app, and I was interested to see how comfortable people would be scheduling a message far into the future. As it turns out, our data shows that most people are using TimeSpring to send 10- or 20- year messages. Not only that, we have many grandparents on the platform who are sending future messages to their grandchildren, which I feel sort of bridges a generational and technological gap.

The TimeSpring app has been available in the Apple Store and Google Play since it’s release in 2017. How has it evolved over the last year and what new features have you added?

Thankfully, our users have not been shy about asking for the things that they want. A few months into the app stores, users suggested that there be a way to send yourself a message, so we launched our send-to-self feature. Also, thanks to user feedback, we added multi-person send, so anyone can send one message to multiple people, which is great for when you want to send a message to all your kids or all of your grandchildren.

Some entrepreneurs have claimed it is easier to make it these days because individuals can create an app and suddenly become overnight successes. What would you say to those critics?

I’m usually sceptical of any story that renders someone or some business to be an overnight success. I suspect there’s probably a bigger story there, and it may seem like it happened instantly, but there was probably a lot of hard work, small successes, and even failures to get to that point.

How much time and work did it take to get TimeSpring from an idea to the finished product?

I would say that TimeSpring was in an ideation phase for at least 18 months. It required a lot of planning, contemplation, research, and iterations before we were ready to launch. During that time, I had a very good support system and had been advised by many people along the way, including my husband, who has a wealth of experience with startups as well as building and scaling a company.

TimeSpring can deliver photos to individuals after the passing of a loved one. Have you had users experience this already and received any feedback about the experience.

Yes, TimeSpring does deliver messages posthumously, which has led us to do a lot of work with people suffering from terminal illness. Currently, we are involved with several ALS non-profits, and the people who are using TimeSpring in this way are using it for the sole purpose of staying connected to the family after they pass. I’m lucky to be of service to this group of people who sorely needed this type of technology, and when I hear that someone who is terminally ill is sending messages to their loved ones, I’m thankful that they can.

As a mother and inventor of the app, what are your tips to users about taking family photos and sharing them in the future?

My advice would be that a TimeSpring message isn’t like the instant-sharing that we’re used to today. We don’t want every photo to last forever, we certainly don’t want pictures of avocado toast living online for ten or twenty years.  In a way, TimeSpring can be an extension of your legacy. Of course, it’s great to send a message for a milestone, birthday, or holiday, but I personally, like sending a TimeSpring about something small that happened in the day, or something that my child might have said that was particularly insightful and share it with them.

With the success of TimeSpring, are you contemplating the creation of another app?

Well, I feel like there’s still a lot of exciting times ahead with TimeSpring. I’m excited for the first batch of five-year messages to get unlocked. Though, since I founded TimeSpring, many people have come up to me to talk about their app ideas, which is always really interesting.

Felice, what was your original background as an entrepreneur and with building apps?

Before TimeSpring, I used to be a high school English and mythology teacher, not exactly a tech background. However, year after year of teaching about the American Dream, I actually began to resent the topic. And who doesn’t like Gatsby? So, I’ve always had a side of me that wanted to create something useful and impactful. It also really helps that my husband is an entrepreneur, and I got a front row seat on the roller coaster ride that embodies a startup, so I had an idea for what I was signing up for.

What is your advice for someone with a great app idea, but has never built one before?

I would say start with educating yourself as much as you possibly can. Do your research, read books, talk to people who are in the field, and try to learn as much as possible from other people and their mistakes.

Felice, what is a day in your life like?

Well, I feel like most days, I hit the ground running. I’ve had to become very compartmentalized. For instance, when I’m with my children, and doing mom things, like reading before bed or cleaning Cheerios off the ground. I am trying to be present. When I’m working, I am just working and completely focused. It’s not easy to train your mind to behave in this way. I would say that most people don’t know I’m an avid reader, and I consume books, or actually, listen to books now. Before starting TimeSpring, I must’ve read up to 50 books about business and startups.

Time scares me. Everyone says that the time with your kids goes by so quickly, and it’s completely true.

Do you have any hobbies?

I can’t deny my English literature roots even today, so I’d have to say, Shakespeare.

“Experience keeps an expensive school, but fools will learn in no other, and scare in that.” – Benjamin Franklin

For more information on Felice Bernard and TimeSpring, please visit https://timespring.com/ or download it in the Apple App Store or Google Play Store.