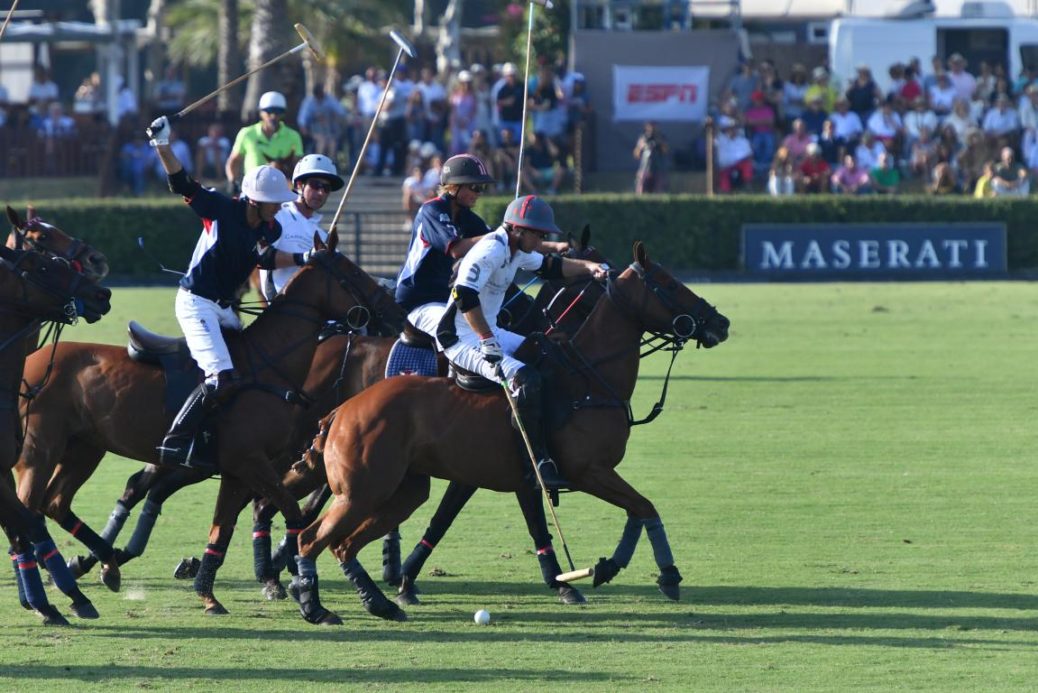 The Maserati Gold Cup Final took place on August 31, a spectacular end to the Maserati Polo Tour 2018. La Indiana Polo Team won over Lechuza Caracas by 13 to 8 after a thrilling match. The Maserati Gold Cup is the most prestigious of the three high handicap trophies to be awarded during the 47th  International Polo Tournament in Sotogrande, held at the iconic Santa Maria Polo Club, of which Maserati is the Official Car. FacundoPieres was awarded the best player and highest goal scorer trophies, while Azucar was named the best pony.

FacundoPieres (La Indiana) said after the game: “This final was our best game to date. Our opponents were really tough to beat: they played really well and had won the Silver Cup a couple of weeks ago. However we found additional strengths to pkay an amazing fourth ‘chukker’ and were able to maintain our advantage till the end. I am extremely happy with this trophy, especially for the team, who have worked really hard for it. Winning the Maserati Gold Cup is not something that happens every day, and with this win we start preparing for next season in Argentina with renewed enthusiasm and highly motivated”. The 47th International Polo Tournament in Sotogrande (Spain) is the third Grand Slam polo event of the year: the high competitive value that distinguishes it – it’s played at 22 goal level and awards 150 points to the winner – attracts the best players and the best teams in the world. The Sotogrande tournament is the last stage of the Maserati Polo Tour 2018 in collaboration with La Martina, after St Moritz in Switzerland and Beaufort in the UK. At the Santa Maria Polo Club in Sotogrande, the Trident Marque has shown its renewed MY19 Range, featuring subtle upgrades and new content for both the Maserati saloons and the Levante SUV.

The MTC+ infotainment system on all three models has been enhanced with updated display graphics and improved climate control system ergonomics.

In their sumptuous interiors, Maserati introduces for the first time the full-grain Pieno Fiore leather, which is incomparable to any other material in the automotive industry for its natural, soft feel and the unique character it attains throughout the years. It is available in three colours – black, red and tan with specific stitching on the seats and double stitching on the door panels. Exterior colour ranges have also been refreshed for MY19, with two new tri-coat colours now available, RossoPotente and Blu Nobile.

In the wide collection of alloy wheels designed specifically for every single Maserati model, there are five brand new designs in the MY19 catalogue in 20 and 21-inch sizes.

Visitors to the Santa Maria Polo Club were able to test drive all the models in the MY19 range, accompanied by Maserati’s team of professional drivers: from the Ghibli executive saloon, to the Quattroporte flagship, as well as the first Maserati SUV, the Levante.

Maserati has a strong presence in Sotogrande, within the various facilities of the Santa Maria Polo Club, with a lounge, four VIP terraces and a Maserati Store, offering a selection of accessories, clothes and memorabilia of the iconic Italian car manufacturer. Spanish top model Nieves Alvarez arrived at the Santa Maria Polo Club in a Maserati Levante. Looking stunning in a gipsy-style dress by Italian brand Twin Set, wearing Bulgari jewels and accessories, and Acquazzura sandals, she said after the game: “I’m delighted to be here in Sotogrande again: this event is an unmissable fixture in the sports and social Summer calendar. It is a real privilege to hand over the Maserati Gold Cup to FacundoPieres and team La Indiana after such a thrilling match.”