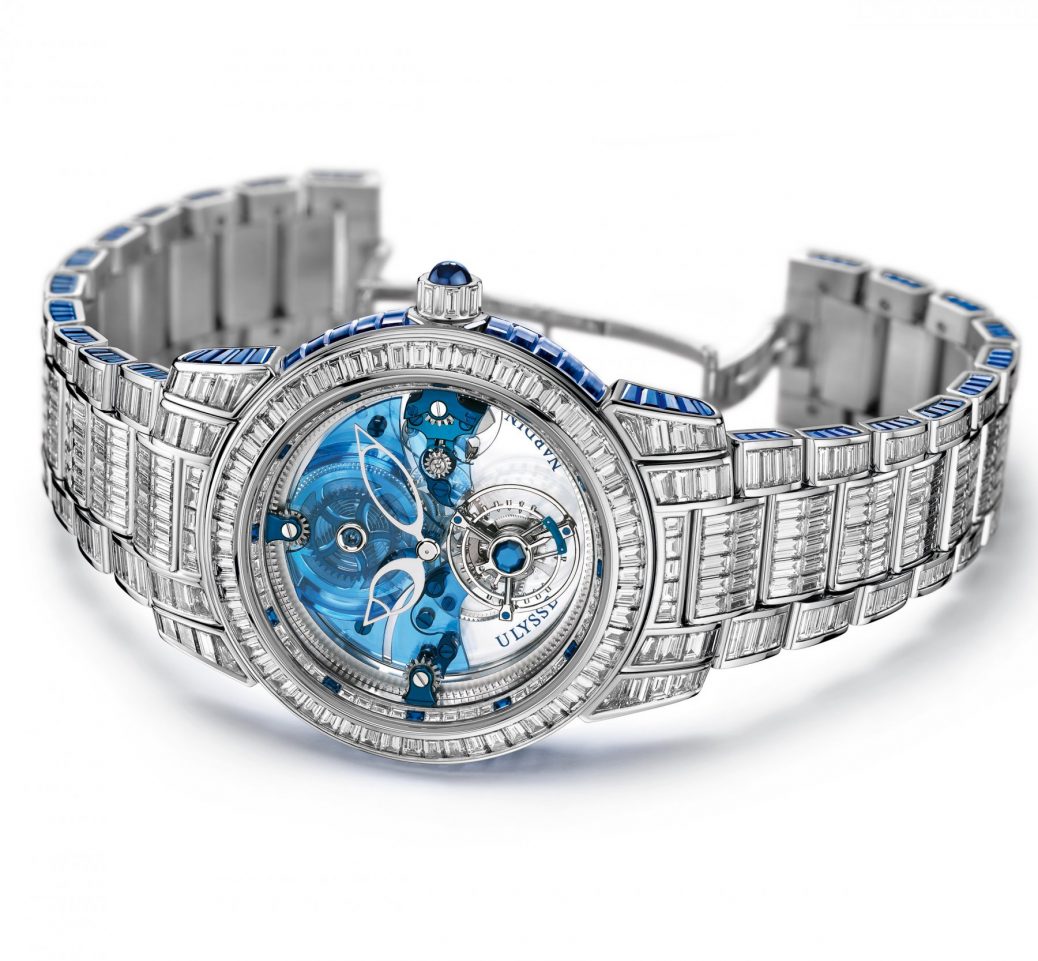 A number one jaw dropper and a heart breaker for all of us who don’t own it. This little time piece is not just a time piece but a piece that has the power that in one plunge it can personify the entire luxury watch industry. It has all the royal elements including the royal intense blue colour, diamonds, platinum and sapphires. A glance at this watch clearly shows the perfect pinnacle of high end life style and absolute richness flowing from its view that makes it elegantly grand splendour.

Ulysse Nardin chose the royal colours white accompanying blue in this watch. Luminous blue which is matchless to any other shades of blue and white which is made by the peerless platinum and diamonds. Almost entire creation of the watch is filled by platinum and diamonds. 950 solid platinum encompasses in 43mm wide case. However, the deceiving eyes will perceive only little amount of platinum because of the rich and enthusiastic quantity of precious stones that comprises of diamonds and sapphires.

Now going out of the line, this matchless Ulysse Nardin was founded in 1846, in the city of Le Locle in Switzerland. It is one amongst few companies that has stayed in the consistent production for over a period of 165 years. One interesting thing everybody would like to know is that it has operated out of the same building head quartered in LE Locle in Switzerland since its establishment. The company is best known for, of course other than the Royal Blue Tourbillon, its manufacture of highly accurate marine chromo metres which was bestowed at one point in between the 1800s to more than fifty of the world’s navies.

The number of Top Wesselton baguette cut diamonds all over the watch is seemingly countless. The watch is embodied in hundreds of large carat stones all over the entire dial, bracelet and even the case. Company mentions that this timepiece possesses 568 diamonds and 236 royal blue sapphires making a total of 50.59 carats. All through the surface of the Royal Blue Tourbillon, specially chosen and cut stones were filled in the stones nooks. One must understand that this is not just a diamond decoration without a design. The combination of the diamonds and sapphires, arranging in this fashion creates a look that is so much more than just amalgamation of the jewels.  Side placed sapphire jewels are cut with curves, so the watch gives an angled shape side.

No doubt Ulysse Nardin is worth proclaiming its position in the luxury watch world.