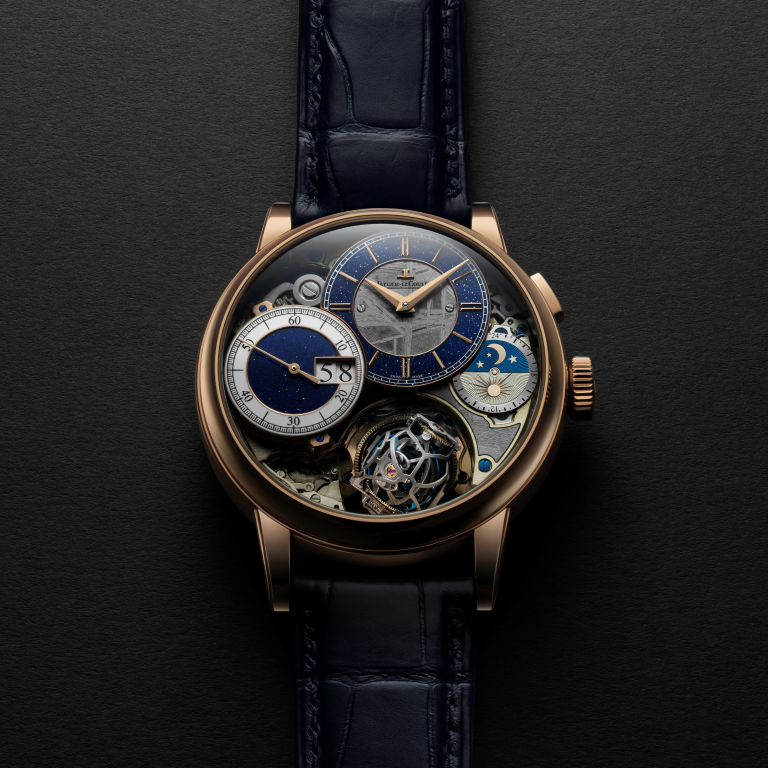 Encapsulating the core values of La Grande Maison, Jaeger-LeCoultre presents a new version of the Master Grande Tradition Gyrotourbillon 3, which marries the technical tour-de-force of its signature multi-axis tourbillon to the finest of artistic craftsmanship.

In 2013, Jaeger-LeCoultre first introduced the Master Grande Tradition Gyrotourbillon 3 to mark the Maison’s 180th anniversary. Combining a third-generation interpretation of the Gyrotourbillon with an intriguing and highly unusual instantaneous digital display chronograph, it represents mechanical sophistication of the highest order.

But still, Jaeger-LeCoultre wanted to do more. And so, this new version of Gyrotourbillon 3 harnesses the exceptional skills of the Manufacture’s Rare Handcrafts™ (Métiers Rares®) artisans to elevate the rare and precious timepiece to a new level. With various elements of the dial showcasing the traditional Rare Handcrafts™ of hand-guillochage, engraving and grand feu enamel, this new model introduces the rarely seen craft of meteorite inlay.

On the dial side, the intriguing geometric markings of the silvery-grey meteorite are complemented by the subtle glitter of deep blue aventurine and the glow of pure white grand feu enamel. This harmonious interplay of materials, colour and surface pattern is complemented by the warmth and richness of the pink gold case and dial details.

Found in Namibia, the Gibeon meteorite chosen for this watch is an iron-nickel alloy with an octahedrite crystal structure, formed by the cooling of the asteroid fragment in outer space over the course of billions of years before it crashed to earth in prehistoric times. The abstract geometric patterns of the intersecting crystal structures shimmer gently when the material catches the light, their irregular arrangement making every slice of meteorite subtly different from all others.

In addition to the meteorite inlaid on the German silver bridges, a disc of meteorite sits at the centre of the time display dial, surrounded by a ring of aventurine with applied indexes. On the chronograph display, an aventurine disc is encircled by a ring of white grand feu enamel, marked with elapsed seconds. The Day/Night display comprises a 24-hour plate on which two gold semi-circles are applied, one each for day and night. The white day section is decorated with hand-guilloché, hand-engraved sunrays and an applied polished pink gold sun; the night section features applied polished pink gold crescent moon and stars, set on a rich blue background.

Asymmetrical yet perfectly balanced, these three overlapping dials are layered, adding visual depth to the watch face – and, despite tempting glimpses of the movement, drawing the eye irresistibly to the tourbillon as it spins in space, with no immediately visible means of support. 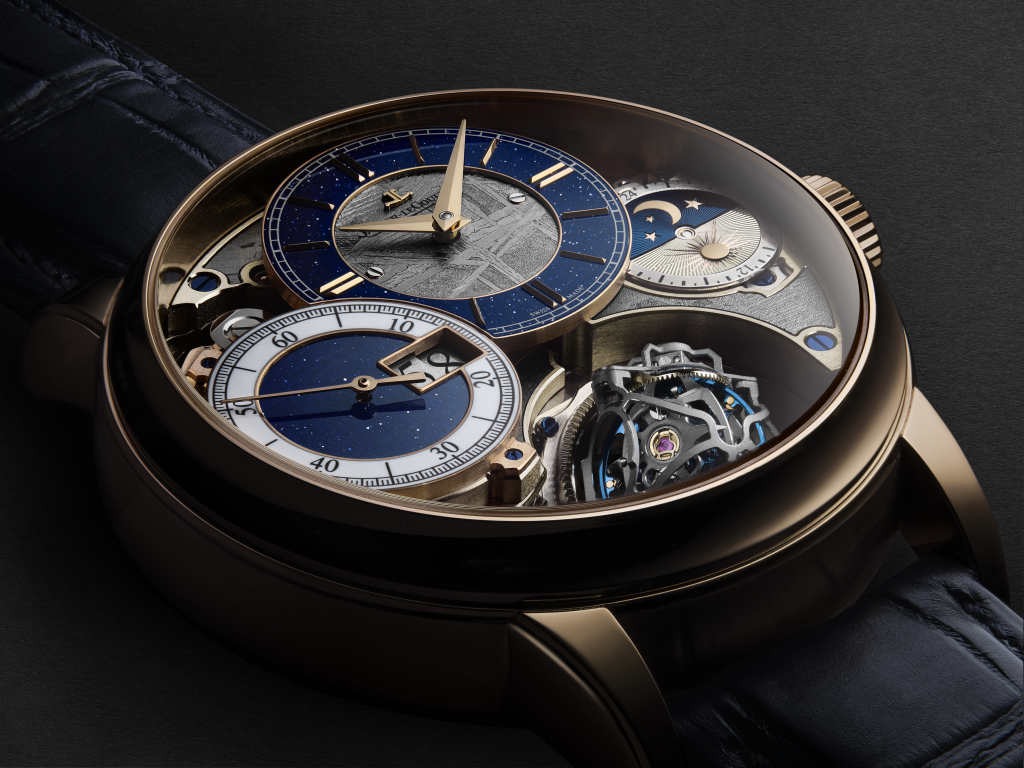 It is on the back of the movement that the meteorite truly takes centre stage. A lively yet subtle mixture of colour and texture – blued screws, ruby jewels, the shiny aspect of the hand-chamfered and hand-polished jewel countersinks, bridges and plates, and the matt finish of the brushed borders of the German silver plates – offsets the abstract geometric patterns of the meteorite, which adorns all of the plates and bridges.

A skill mastered by very few craftsmen in the world, meteorite inlay requires a rare degree of precision and dexterity. First, the artisan must hollow out the surface of the German silver plate or bridge, to a depth that exactly matches the thickness of the meteorite fragment, leaving only a fine fillet of German silver at the borders. Once the new surface has been polished, the meteorite must be laid so that its edges fit seamlessly within the complex, curving borders and its surface lies exactly flush with them, to form a completely flat and unified plane. It is work of the utmost refinement and precision, measured in fractions of a millimetre.

Such exacting work complements the remarkable precision of the Gyrotourbillon mechanism. Exceedingly rare and complex, this multi-axis tourbillon comprises two cages, set at two different angles, turning opposite directions, at different speeds, with a blued spherical balance spring beating like a heart in their centre. In the absence of a tourbillon bridge, the cantilevered all-aluminium cages of Gyrotourbillon 3 appear to be suspended in space.

Hand-wound movement, calibre 176, incorporates a fully integrated chronograph, which displays the seconds on a traditional round dial and elapsed minutes on an instantaneously jumping digital counter.