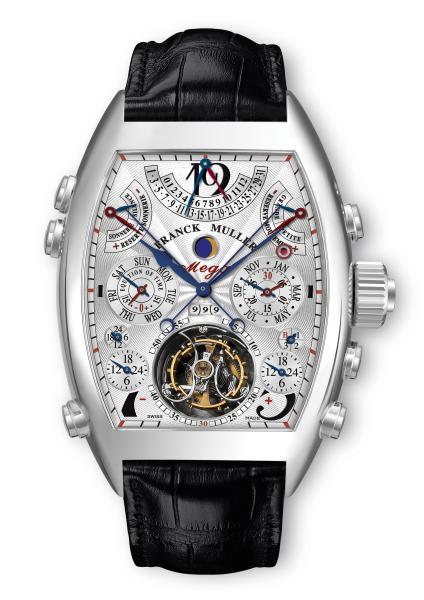 One of the most beautiful watches I have ever seen is the Franck Muller Aeternitas Mega 4. Yes, it is one of my brutally honest and professional views that compel me to say that I simply love the look, form and touch of the Mega 4 from Franck Muller Collectives. You may ask a number of people about their favorite timepiece, you will get the answer that it is Frank Muller Aeternitas Mega 4. This may be a surprise to a lot many watch connoisseurs, however it is simply not the complications that make it a choice, it is the stunning craftsmanship or its technical detail that makes It an amazing creation in the world of watches.

It was the effort of men with vast experience in the field of watchmaking and who shared the same passion when one of them Franck Muller was creating his own watches under the brand name of Frank Geneva. Vartan Sirmakes met him and they both started the journey in creating legendary watches since the end of 1980’s. While Sirmakes was pioneer in making cases for several watchmaking brands in a workshop, Muller earned sobriquets of watchmaking genius every year through his presentation of his World Premiers that were based on the prestigious complications.

The Primary aim of the Aeternitas Mega Project was to create an extremely complex mechanism for watch. Whereas at the second stage the project of Mega involved quest to get good and noble complications that would enhance the complications into a genuine feat of technology and make it the world’s most complex wristwatch ever made. With a total of 36 complications out of which 25 of them stand visible, the masterpiece includes 1483 components that took almost more than 5 years of work to produce this techno feat. The Franck Muller Aeternitas Mega 4 has a 1000-year calendar. Due to the pulverizing of the record number of complications that could have ever been housed in a single watch, no doubt Franck Muller deserved the name of Master of Complications.

Though the challenge to the Master watchmakers was enormous to embed all the complications known to them in a piece that was to be designed, the Aeternitas movement provided them the base whereas the Mega 4 represented the apotheosis of the art of watchmaking due to the striking work of the small and grand Westminster chime, the only one available in the market with tourbillion seen on the dial of the watch.

The Mega 4 represents the pinnacle of Swiss watchmaking and a climax in the profession post the years of 90. It was then that the industry has lost its fame due to slump in quartz, Still Franck Muller with his focus on the complications of mechanical watches and his beautiful demonstrations of timepieces put Swiss clockwork back to its place as the best and undisputed makers in the world.