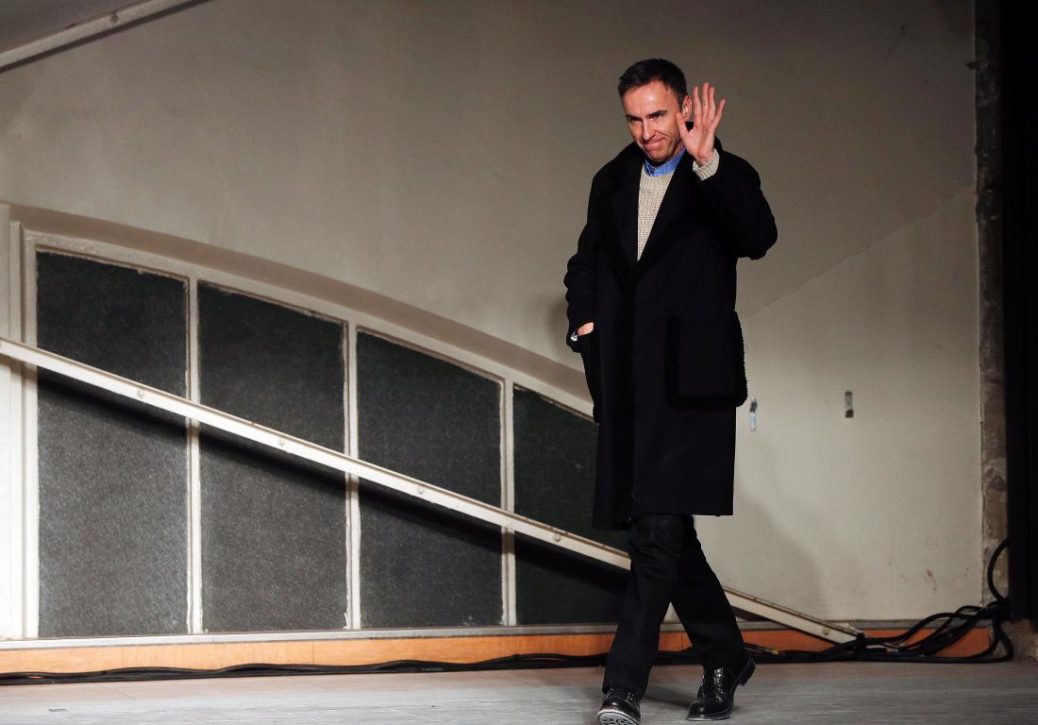 Those who marveled at his collection simply know him as the newest chief creative officer for the brand, but few actually know much about him.

WHAT YOU NEED TO KNOW ABOUT RAF SIMONS

Simons was born on January 12, 1968 in Neerpelt, Belgium. He studies furniture and industrial design in college and graduated with his degree in 1991. Following his studies, however, Simons became interested in fashion after seeing the work of the Antwerp Six, a group of fashion designers. He was granted an internship at Walter Van Beirendonck’s studio. Beirendonck was one of the Antwerp Six.

While interning, Simons went to Paris Fashion Week which featured Marin Margiela’s designs. Margiela’s work was the final motivation to pursue fashion design as a career.

In 1995, Simons released his first label, Raf Simons, thanks to encouragement from Linda Loppa, the then-head of the fashion division at Antwerp Royal Academy, now headed by Beirendonck. Although his line was first debuted in a video, they were walked down the runway in 1997 for the first time.

Only three years later, Simons took a sabbatical from designing so he could take a position as the head of the fashion department at Vienna’s University of Applied Arts. He left his position in 2005 but had expanded his menswear line in 2001. 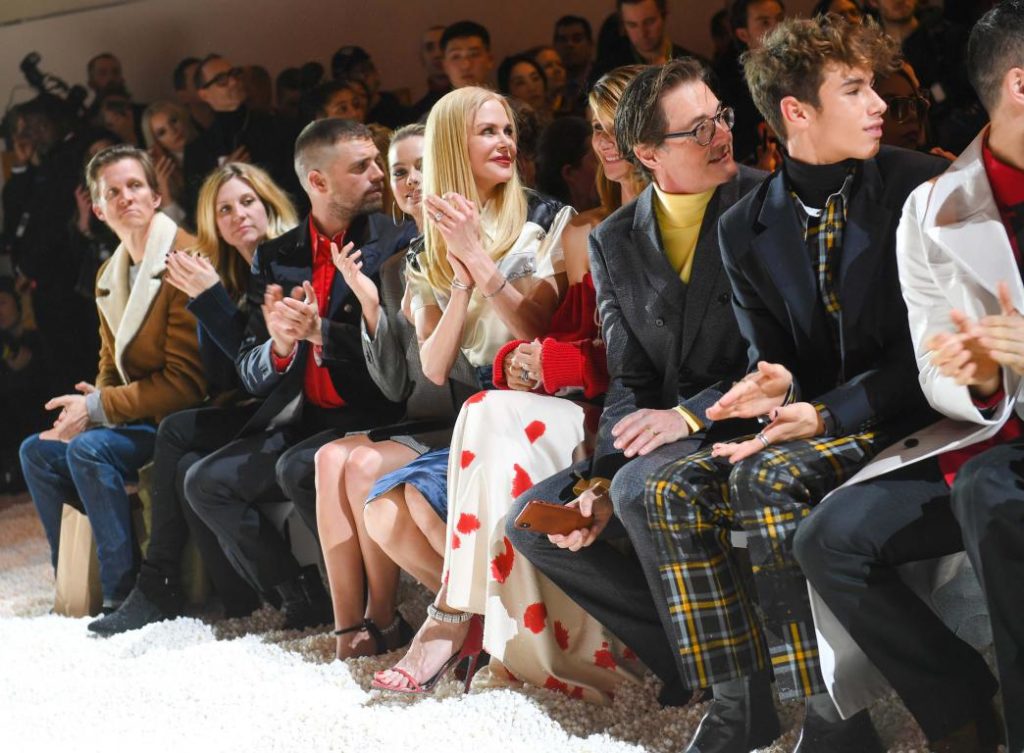 By 2005, Simons was appointed the creative director of Jil Sander, serving there for 7 years. Sander is a minimalist German fashion designer.

After that, Simons quickly rose to popularity. He served as the artistic director at Christian Dior, replacing John Galliano who was fired the year prior. Galliano was fired after being arrested for directing racial and anti-Semitic slurs toward them. Natalie Portman, spokesperson for a Dior perfume who is Jewish herself, and people all over the world pressured Dior to fire him.

Dior is one of the most famous labels in the world. Located first in Italy, the brand sells men’s and women’s fashion, fragrances, makeup, skincare, jewelry, watches, and baby clothes and accessories.

Simons left his position in October 2015. A year later, he became the chief creative officer of Calvin Klein. In his position, Simons is responsible for leading the creative strategy of the brand globally across the designer, contemporary, bridge, jeans, underwear, and home categories. He also oversees every aspect of the Global Marketing and Communications, Visual Creative Services, and Store Design divisions at Calvin Klein.

Simons is currently in a relationship with Jean-Georges d’Orazio, who was named the senior director of brand experience at Calvin Klein in 2017.

As you can see, Simons has had an illustrious career in the fashion design industry. Each of his experiences led up to his most recent collection, LANDSCAPES, which he debutedin a runway show at the American Stock Exchange in New York City in February 2018. 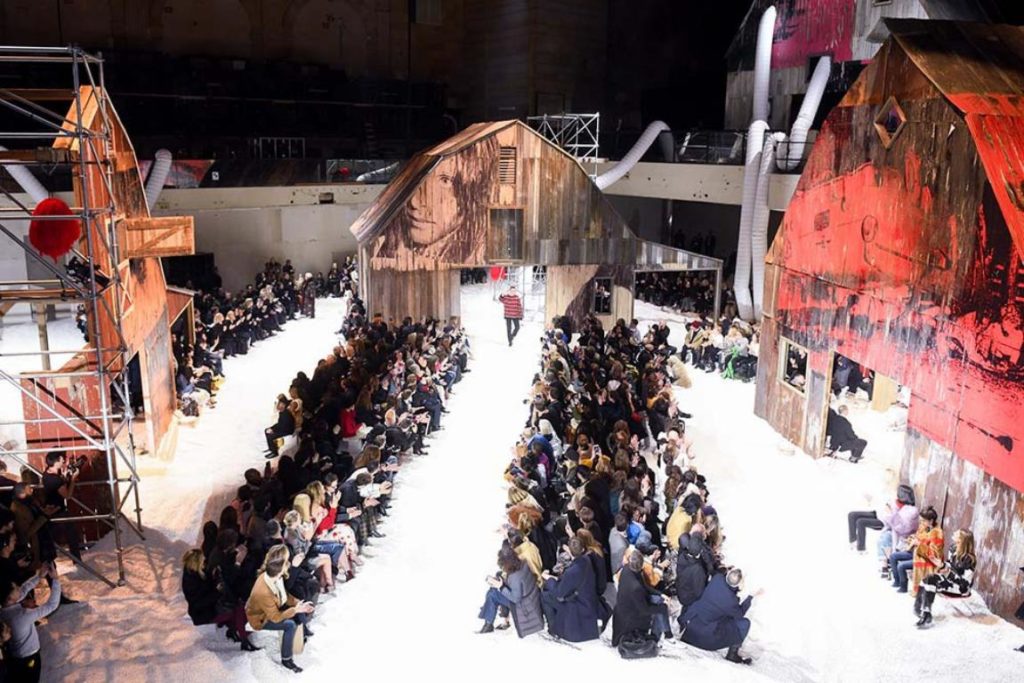 The most recent collection is the latest the designer has released since taking the position in 2016 following the dismissal of John Galliano in 2015. This collection is his third with Calvin Klein.

In his own words, Simons describes his newest collection as “a view onto American Society – but now wider, universal.”

“It’s an allegory for a meeting of old worlds and new worlds, relating to the discovery of America, the 1960s Space Race, and the twenty-first century information age,” he said. “Reflecting the notion of democracy, there is no cultural hierarchy: the mixes emancipate clothing and references from their meanings, from their own narratives, and collage them to discover something different – a different dream. More than anything else, this collection is about freedom. A word that defines America, and Calvin Klein.” 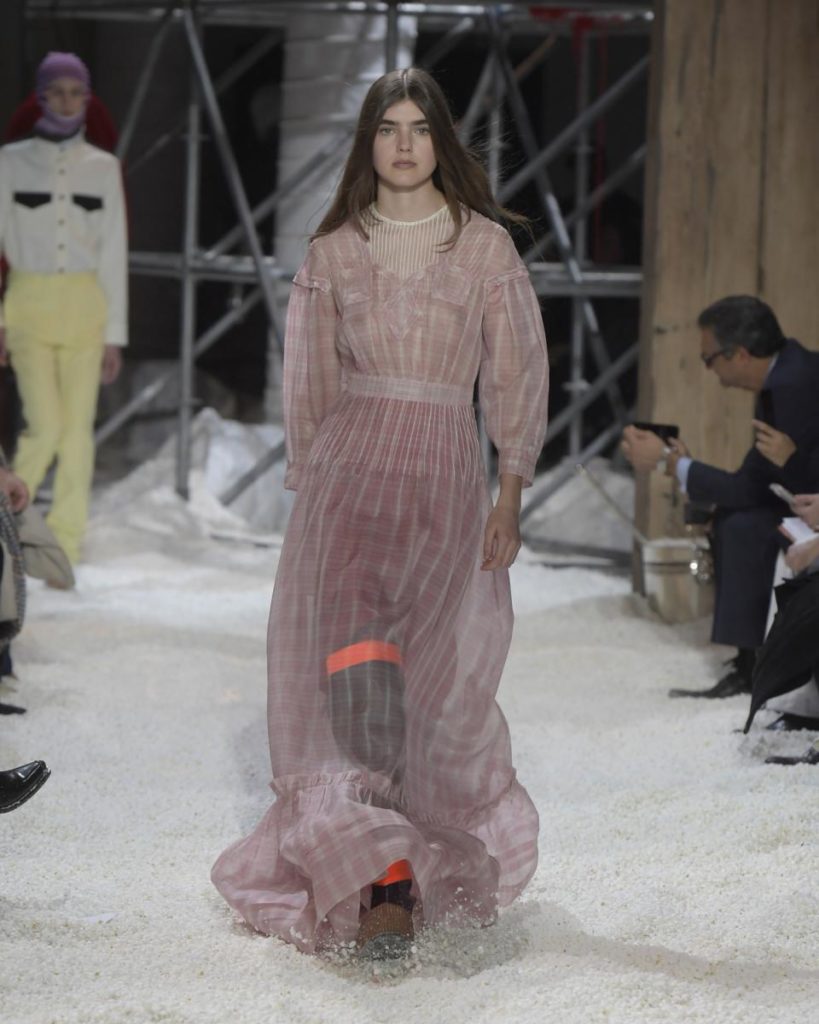 The runway was set up to resemble a movie set, allowing each model to pass down the runway in the American Stock Exchange as if they were characters in a movie that showcased an international unification of history and humanity through fashion.

The backdrop featured artwork by Sterling Ruby and Andy Warhol against parts of a nineteenth century prairie barn featured in the Calvin Klein 205W39NYC Spring 2018 campaign. Popcorn covered the floor, resembling snow, and air duct tubing that gave viewers a “Signs” vibe, as the film portrayed aliens and their activity on a farm.

His audience was packed full with special guests like A$AP Rocky, who released a song called RAP in 2017 where he boasts about all of the Raf Simons designs he owns himself. Other notable guests were Nicole Kidman, Margot Robbie, Millie Bobby Brown, Michael B. Jordan, James Murphy, Christina Ricci, Paris Jackson, Valeria Bilello, Cindy Crawford, Karlie Kloss, Jelly Lin, Brian Anderson, and Clara3000, among others. 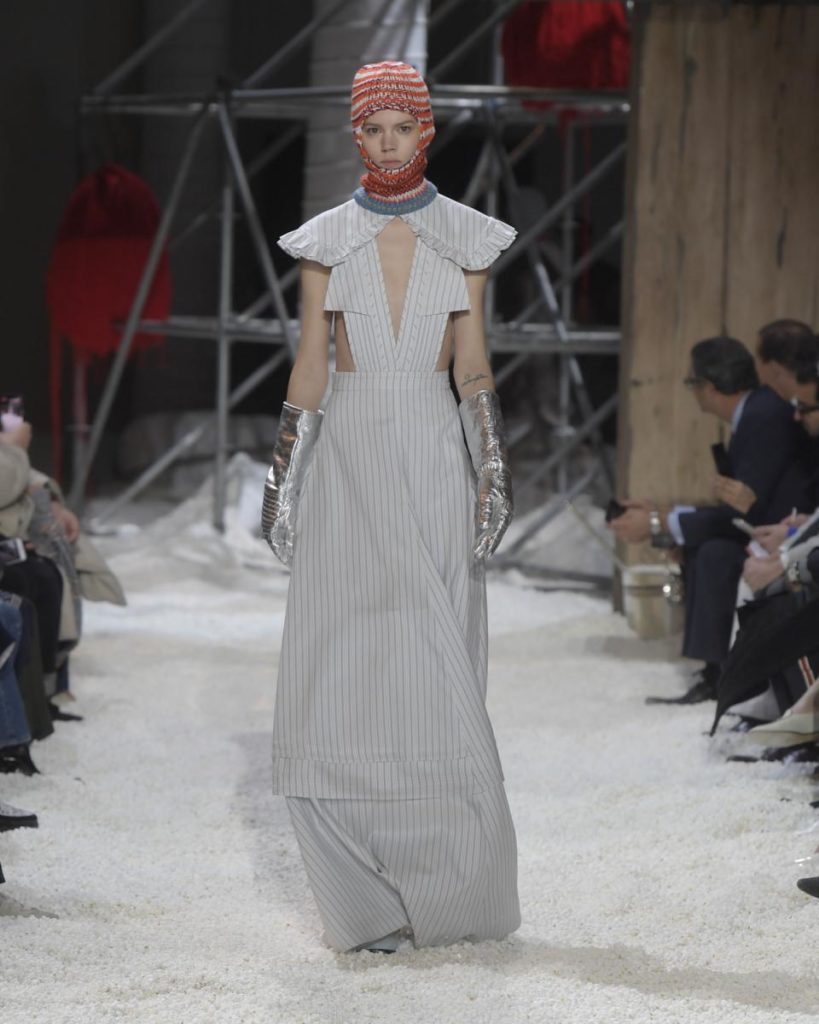 WHAT THE CRITICS SAY

According to Horyn, the fashion industry is abuzz as the pieces were both “thought-provoking” and more wearable. A lot of people suggested that the pieces were sophisticated enough for Europe, and that the designer should have bypassed his show in New York and headed straight to America’s motherland. 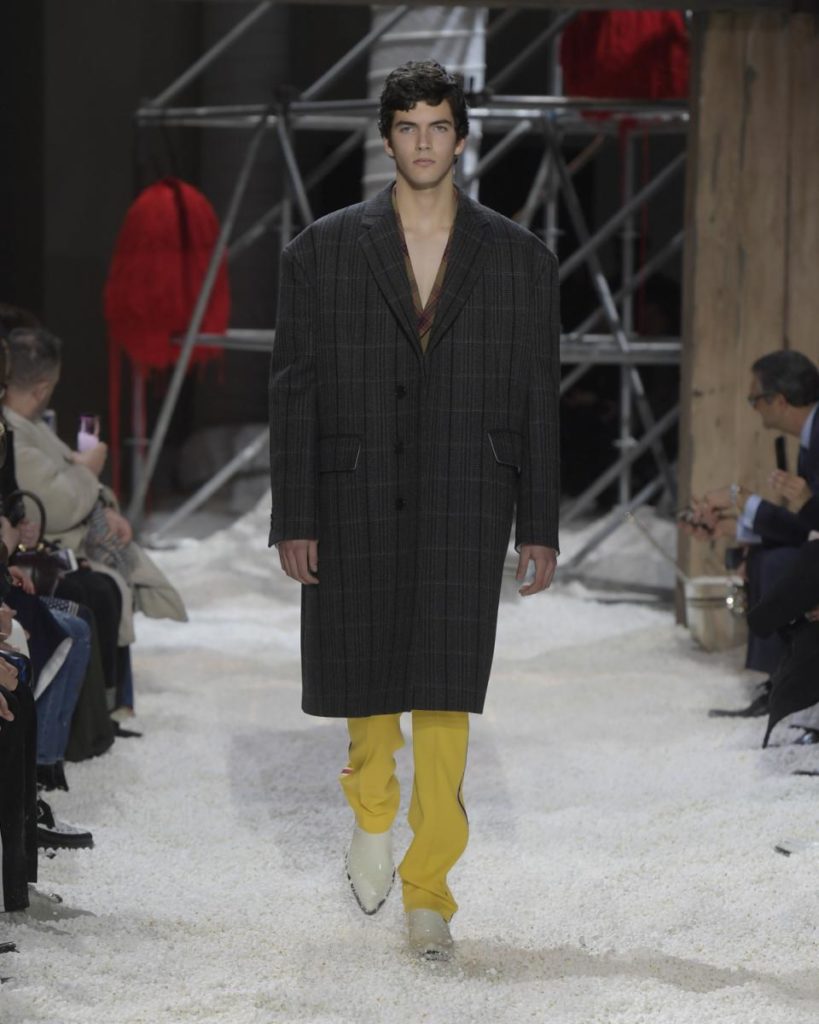 Here is what Horyn had to say about the collection:

“Planted in the corn were masculine coats — at once Calvin and Raf in their minimalist heft — over long, flounced dresses in pale neutral hues that evoked something rural and hippie; a festival or maybe a farm. There were also semi-sheer dresses layered over more fitted plaid styles; the effect was rather like a female figure seen through a window curtain (or, if your thoughts run darker, a shower curtain). “

Simons has been a creative or artistic director for several well-known labels around the world. 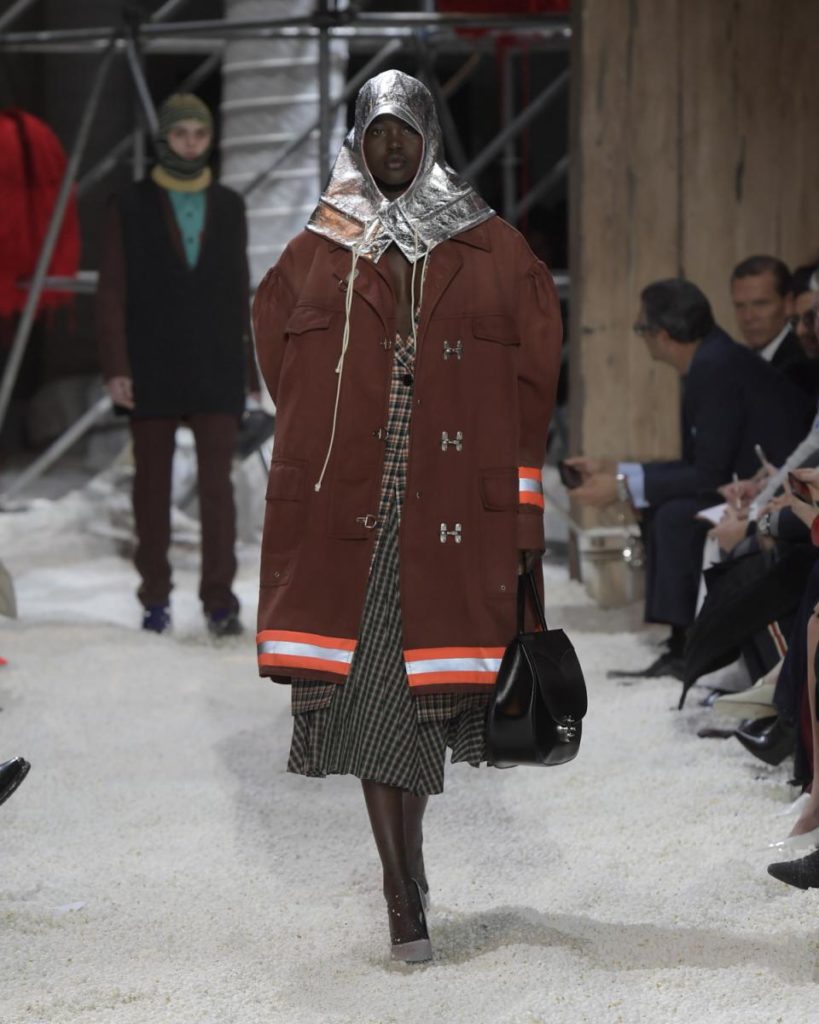