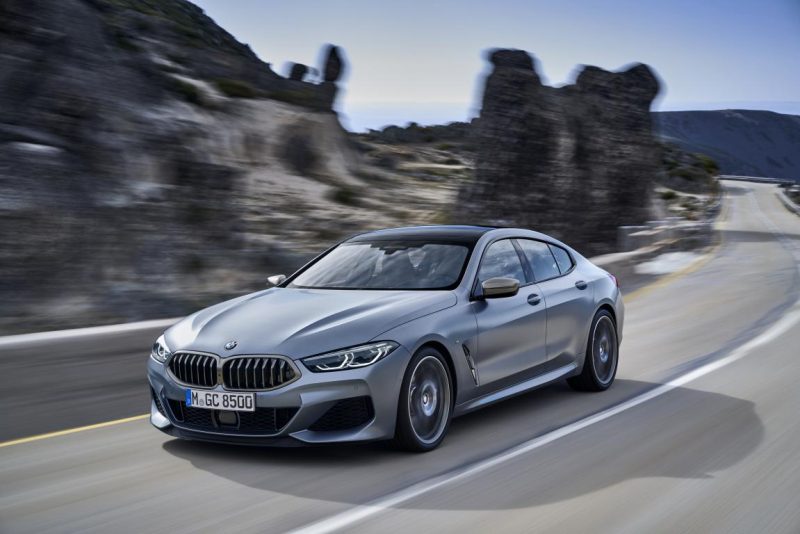 Another captivating sports car is joining the ranks of the new BMW 8 Series range. Following the launch of the new BMW 8 Series Coupe and new BMW 8 Series Convertible, the new BMW 8 Series Gran Coupe is now poised to make its debut, combining dynamic prowess and a luxurious aura with a four-door body design and far more spacious rear passenger compartment. The third model variant in the line-up is a sports car brimming with individual character. Its everyday usability and impressive long-distance credentials open up new ways of enjoying the thrilling performance and emotion-packed design inherent in every BMW 8 Series. Exclusive equipment features and the very latest innovations in control/operation, driver assistance and connectivity advance the cause of modern luxury.

The new BMW 8 Series Gran Coupe is the only model in its segment derived directly from a two-door sports car. Exhilarating performance runs through its veins, a consequence of its development alongside the new BMW 8 Series Coupe and M8 GTE racing car – which competes in the FIA World Endurance Championship (WEC) and the IMSA WeatherTech SportsCar Championship (IWSC) in North America. This third model in the BMW 8 Series range adds more fuel to the ongoing product offensive in the luxury segment identified by the BMW Group – as part of its NUMBER ONE > NEXT strategy – as a key element in ensuring the company’s sustained growth. The newcomer will be built alongside the BMW 8 Series Coupe and BMW 8 Series Convertible at BMW Plant Dingolfing in Lower Bavaria, which has acquired immense expertise in the manufacture of luxury cars in its long-standing role as the home of BMW 7 Series production. The world premiere of the BMW 8 Series Gran Coupe will be one of the highlights of the inaugural BMW Group #NEXTGen event in Munich. The worldwide launch of the new car will commence just a few months later, in September 2019.

The combination of precisely drawn lines and expansive surfaces that runs like a thread through the BMW brand’s new design language helps the exterior of the new BMW 8 Series Gran Coupe to strike a unique balance between dynamism and elegance. The styling is symbolic of the car’s billing as the BMW 8 Series model delivering sportiness at its most luxurious. The four-door coupe concept has been translated into a body of standout pomp and progressiveness.

As well as its distinctive proportions, the design of the new BMW 8 Series Gran Coupe’s flanks and rear end also clearly distinguishes it from its 8 Series stablemates. The four-door model has a 3,023-millimetre wheelbase – an increase of 201 millimetres over the BMW 8 Series Coupe – and measures 5,082 millimetres in length (+ 231 mm), 1,932 millimetres in width (+ 30 mm) and 1,407 millimetres in height (+ 61 mm). The front track width of 1,627 mm is the same as the two-door car’s, while the rear track of 1,671 millimetres is 28 millimetres wider, making it the widest of any model in the BMW line-up. The Gran Coupe’s front section is identical to the 8 Series Coupe’s design up to the point where the A-pillars start. Because the windscreen frame is slightly more upright, the roofline already rises to a greater height by the time it reaches the front seats, meaning additional headroom in both the front and rear. The roofline merges smoothly into the tail in a graceful sweep, via a fin-shaped transition in the vicinity of the C-pillars that emphasises the elongated silhouette. The rear window, meanwhile, also follows a slightly steeper line in order to produce a larger boot aperture. The striking surface contouring around the C-pillars has been facilitated by a rear window that forms a fixed part of the body structure and a conventional boot lid. These two design features also have a positive impact on the body’s torsional rigidity and acoustic comfort in the car’s interior. Integrating the antenna technology into the rear window and boot lid has dispensed with the need for a roof fin. Like the new BMW 8 Series Coupe and 8 Series Convertible, the new BMW 8 Series Gran Coupe also has a front end with a broad, low-slung design that exudes sporting pedigree and confidence. The bonnet’s powerfully sculpted surfaces and crisp contours add to this impression, as does the elaborate, jutting design of the front apron with its large air intakes, which assume an even more imposing appearance on the BMW M850i xDrive Gran Coupe and when the M Sport package is specified. The two elements of the large, low-set BMW kidney grille are framed by a single-piece surround.

The slim twin headlights are positioned slightly higher and define the brand’s signature look with LED units generating both the daytime driving lights and low/high-beam headlights from the two pairs of light tubes. Adaptive LED headlights featuring variable light distribution and cornering lights come as standard on the new BMW 8 Series Gran Coupe. There is also the option of BMW Laserlight with variable road illumination and Selective Beam, which produces a high-beam range of around 600 metres. Blue accents inside the customary twin headlights reveal the presence of this highly sophisticated lighting technology. The car’s flanks taper inwards around the doors before flaring out again like muscles above the rear wheel arches, producing an interplay of surfaces moulded here to particularly striking effect. The elegantly stretched design is further emphasised by a third line that takes in the door handles on its way to the powerfully contoured shoulders and C-pillar.

The side window graphic reaches its conclusion at the rear in another hallmark BMW design cue – the Hofmeister kink. On the new BMW 8 Series Gran Coupe, this counter-swing is very upright in form, emphasising the large surface of the C-pillar and therefore reinforcing the sense of presence and solidity in this area of the body.

The rear end is a case study in power and presence, the powerfully flared wheel arches and wide track playing a defining role. The tail’s horizontal lines and the sculptural contours of its surfaces give it a broad but also light appearance. The slim all-LED rear light clusters extending deep into the flanks add to this impression. Twin exhaust tailpipes with a trapezoidal contour are positioned either side of the rear apron’s lower section. The tailpipes are integrated into the diffuser element on the BMW M850i xDrive Gran Coupe and on models specified with the M Sport package.

The optional panoramic glass roof is one of the special features specific to the new BMW 8 Series Gran Coupe. It takes the form of a continuous glass surface extending from the windscreen back to the rear window and is extremely generous in width. The result is a total glass surface area of around 1.5 square metres, giving the interior an exceptionally light and airy feel. The front section of the roof has an electric mechanism that allows it to be opened and closed at the touch of a button or with the radio remote control, delivering a controlled supply of fresh air. When opening, it first tilts up at the rear before sliding back over the fixed rear section. The two-ply interior blinds are finished in the same colour and material as the headliner and can also be operated electrically, while the rear blind can be opened and closed from the rear compartment as well.

An intelligent material mix and targeted lightweight design measures have minimised the weight of the new BMW 8 Series Gran Coupe. An aluminium monocoque construction is used for its doors and the outer skin of the roof, while elements such as the bonnet, front shear panel, engine subframe, front bulkhead and rear bumper support are also made from aluminium. The plastic boot lid, the magnesium cockpit support and the use of carbon fibre-reinforced plastic in the centre tunnel help to both reduce weight and distribute it to optimum effect. As a result, the four-door version’s weight penalty over the BMW 8 Series Coupe has been limited to around 70 kilograms. Fitting the optional carbon-fibre roof lowers the car’s centre of gravity even further and there is also the option of a Carbon package comprising air intake bars, exterior mirror caps and a rear diffuser insert all made from CFRP. The model-specific M Sport package brings extra dynamic sparkle to the character of the new BMW 8 Series Gran Coupe. Extra-large air intakes in the front apron, a prominently contoured rear apron with a grey diffuser and specially designed side skirts are all included, along with various other eye-catching design touches. The kidney grille slats have Aluminium matt faces and the inside of the Air Breathers is finished in Pearl-effect Chrome. The M Technic Sport Package adds a number of visual highlights courtesy of extended BMW Individual High-gloss Shadow Line trim for the BMW kidney grille surround and slats, the Air Breathers, the exhaust tailpipes and the side window borders.

The standard Chrome Line for the exterior emphasises the elegant appearance of the new BMW 8 Series Gran Coupe with its chrome finish for the side window graphic and exterior mirror bases, plus High-gloss Chrome for the BMW kidney grille surround and slats, and the exhaust tailpipes. There is also a High-gloss Chrome bar bridging the gap between the integral tailpipes on the left and right of the rear apron, another feature exclusive to the new BMW 8 Series Gran Coupe. Chrome Line can also be specified as an option in conjunction with the M Sport package and for the BMW M850i xDrive Gran Coupe.

Special design features have also been used to accentuate the highly individual look of the new BMW M850i xDrive Gran Coupe. The aerodynamically optimised bodywork elements included in the M Sport package are complemented by a front spoiler lip and combine with exclusive styling elements in Cerium Grey. The elements finished in this striking colour include the BMW kidney grille surround and slats, exterior mirror caps, Air Breather inlays and tailpipe trims, the M logo on the front flanks and the model badge on the rear.

The new BMW 8 Series Gran Coupe will be launched with a choice of one non-metallic and six metallic exterior paint finishes. Carbon Black metallic and Barcelona Blue metallic will be offered as additional exterior colours for the BMW M850i xDrive Gran Coupe and in conjunction with the M Sport package. The wide choice of BMW Individual paint finishes and BMW Individual special paint finishes available for the new BMW 8 Series Gran Coupe at launch or shortly afterwards all create a particularly exclusive look. Customers can also take their pick from the BMW Individual matt paintwork variants in a silk matt finish and the particularly eye-catching Frozen Bluestone metallic finish. Plus, the BMW Individual Composition and the BMW Individual Composition with M Sport features – each comprising a precisely coordinated selection of exclusive design details for the exterior and interior – give customers the option of bringing the four-door model’s elegantly luxurious side or thrillingly sporty character even further to the fore.