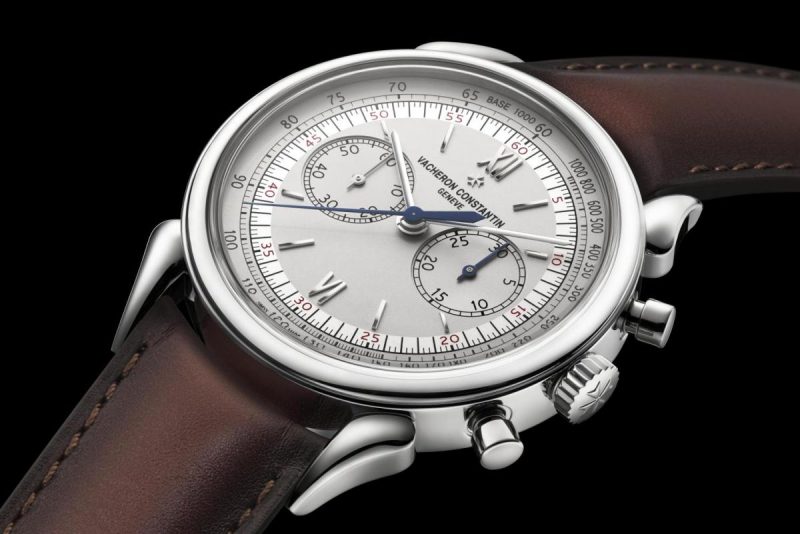 Born in 1955 in the effervescence of the post-war years, the “Cornes de vache” model, named after the characteristic shape of its lugs, quickly established itself as one of the emblematic chronographs of its time. Bearing reference 6087 and produced in extremely limited numbers, it is today one of the most sought-after models among devotees of the Maison. In the vintage spirit of its Historiques collection, Vacheron Constantin is offering a reissue of this steel piece characterised by a blend of tradition and stylistic originality.

Vacheron Constantin wished to give tangible reality to its heritage by creating the Historiques Collection in 2006. Paying tribute to the archetypes that have marked the evolution of the Maison, the collection highlights the richness of the Manufacture’s technical and aesthetic heritage through contemporary reinterpretations of its emblematic models. Aimed above all at connoisseurs looking for pieces imbued with a vintage spirit, Historiques watches are exclusive by nature. Over the years, various models such as the famous American 1921 or the Ultra-fine 1955 have thus been given a new lease on life. 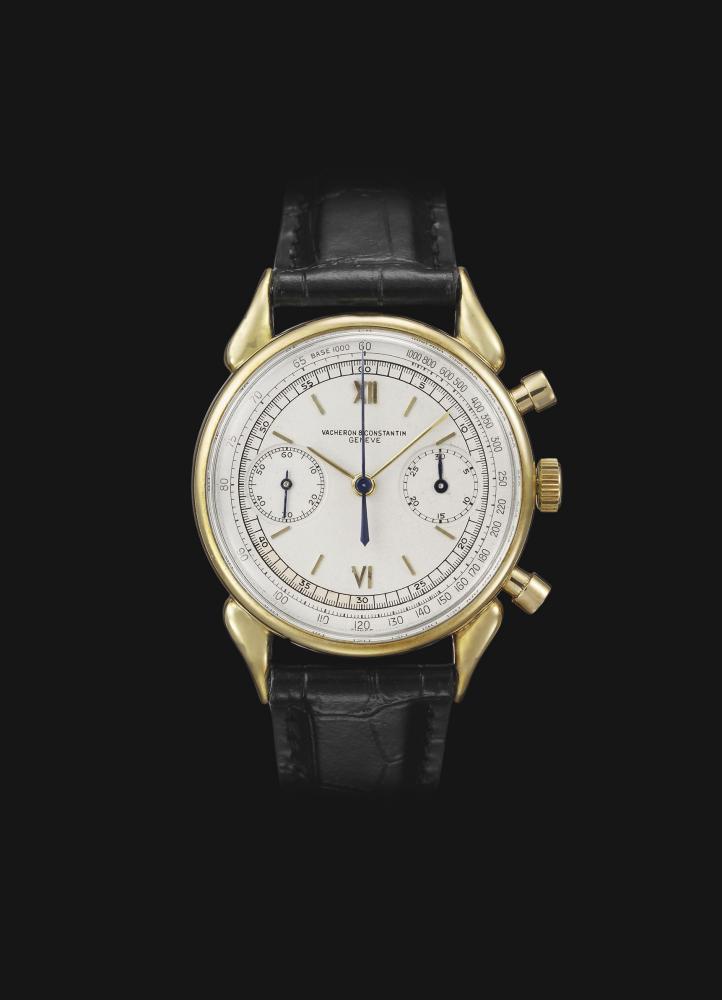 The reference 6087 released in 1955 is one of these legendary watches. It was the Manufacture’s first water-resistant chronograph and currently one of the pieces most coveted by collectors due to its very limited production. Equipped with manual-winding Calibre 492, the model offered a singular blend of technical rigour and creative audacity, particularly due to the evocative shape of its cow horn-shaped lugs. This duality between the traditional architecture of a double-pusher chronograph featuring a dial bearing 30-minute and small seconds counters, together with its unconventional design, vividly expressed the stylistic originality based on subtly offbeat classicism that Vacheron Constantin has consistently cultivated throughout its history.

After two first reissues in platinum in 2015 and 18K 4N pink gold in 2016, the Historiques Cornes de vache 1955 model now returns in a steel version emphasising its vintage inspiration. Water-resistant to 30 metres, the case has a more contemporary 38.5 mm diameter than the 35 mm of the original and naturally bears the distinctive lugs reminiscent of cow horns securing it to the strap. The crafting of the latter was entrusted to the Milanese luxury leather goods Maison, Serapian, founded in 1928, which shares the values of excellence cherished by Vacheron Constantin. A dark brown calf leather strap whose patina blends with the retro look of the model was chosen and Serapian also treated the second loop of the strap to the ‘attacco’ shape featured on its handbag handles – a signature nod to the famous Milanese leather goods manufacturer’s first collaboration with a watchmaker. 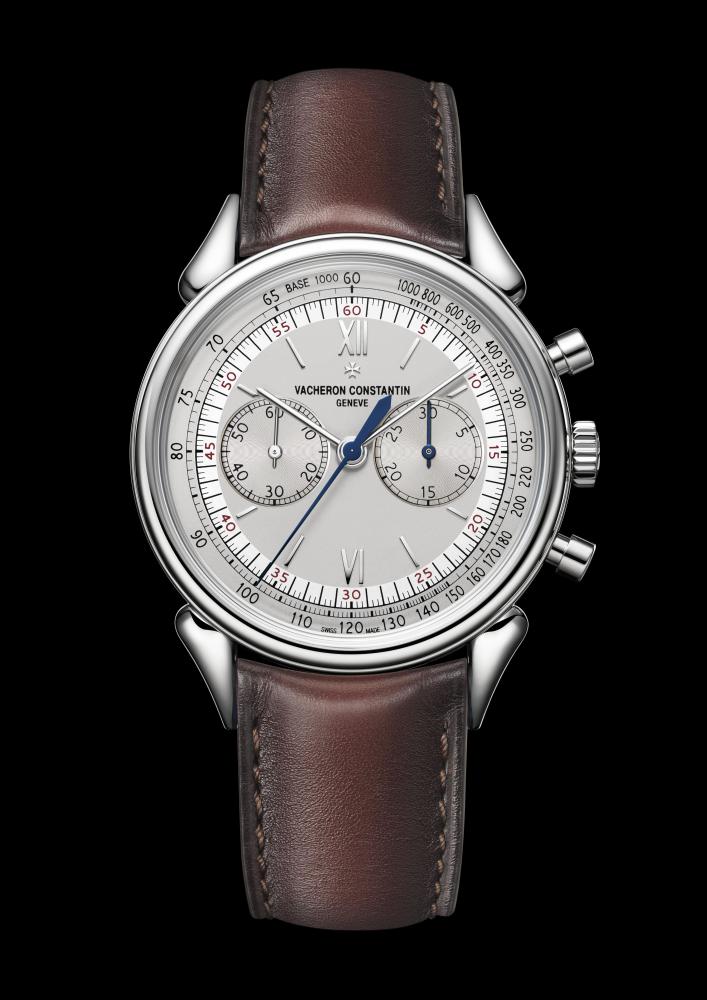 The Historiques Cornes de vache 1955 watch is powered by the manual-winding 1142 chronograph calibre with a 48-hour power reserve. In keeping with the grand watchmaking tradition, the short-time measuring mechanism is controlled by a column-wheel, adorned with a screw head shaped like a Maltese cross, the Vacheron Constantin emblem. Entirely bevelled and hand-decorated, with circular-grained finishes on the dial side and Côtes de Genève on the back, this 164-component movement beating at a rate of 21,600 vibrations per hour (3Hz) can be admired through the transparent sapphire crystal caseback framed by a ten-sided bezel.

The model offers timekeeping functions including small seconds, as well as a chronograph with a central seconds hand and minute counter. A tachymeter scale (serving to determine average speed over a known distance) on a 1000-metre base surrounds the chronograph counter featuring blued steel hands for optimal legibility. A white minute-circle punctuated with dark red numerals highlights the tone of the grey velvet-finished opaline dial, embellished with two snailed counters and bearing applied gold Roman numerals and hour-markers.

As part of its Historiques collection, Vacheron Constantin presents a steel version of its emblematic “Cornes de vache” model, the Maison’s first water-resistant chronograph launched in 1955. Immediately recognisable by its distinctive cow horn-like lugs, this model is now one of the most sought-after among collectors. This reissue, aesthetically faithful to the original, is adapted to current watchmaking standards. The diameter of the case, which is water-resistant to 30 metres, has been increased to 38.5 mm. It now houses manual-winding chronograph Calibre 1142, beating at 21,600 vibrations per hour and endowed with a 48-hour power reserve. This movement powers timekeeping functions including small seconds as well as chronograph functions with a central seconds hand and minutes counter appearing on a grey velvet-finish opaline dial, embellished with two snailed counters and a white counter. The crafting of the strap in patinated dark brown calf leather was entrusted to the traditional Milanese leather goods Maison Serapian, founded in 1928, which has thus undertaken its first collaborative endeavour with Vacheron Constantin. 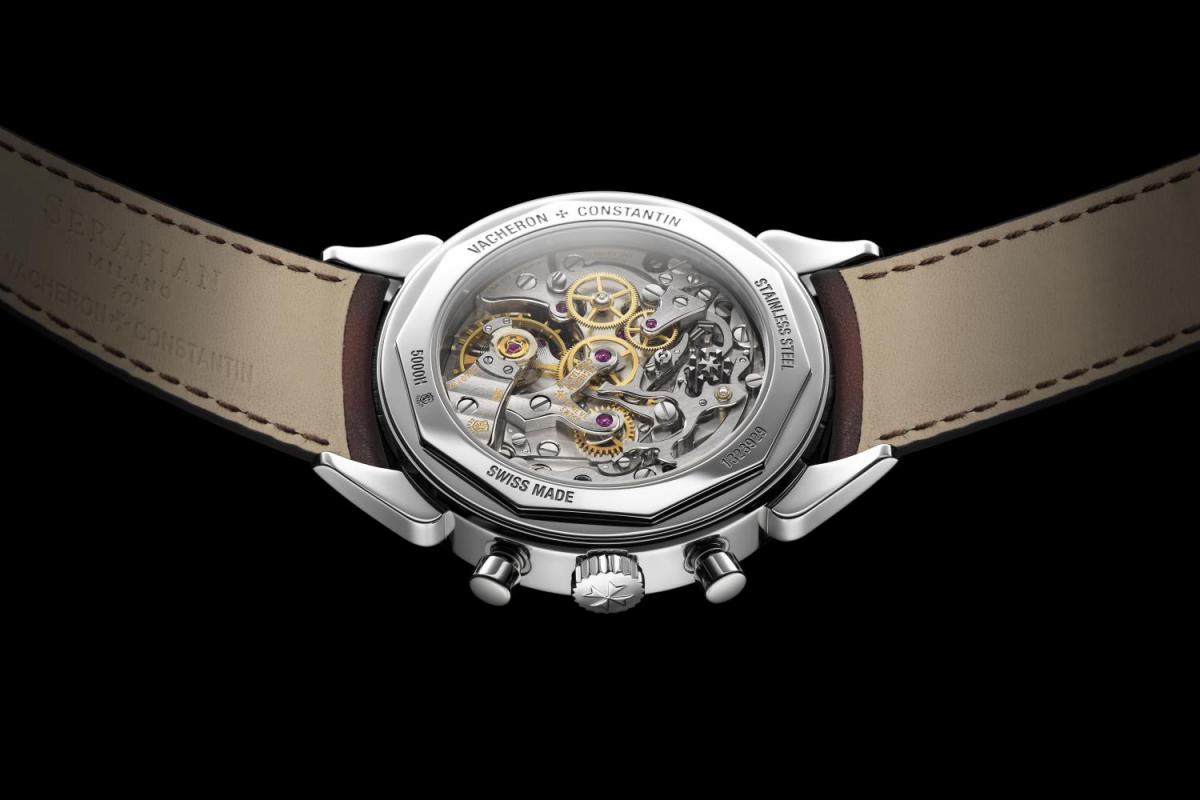